The signs are everywhere, but what is the HOV lane and who can drive in it? 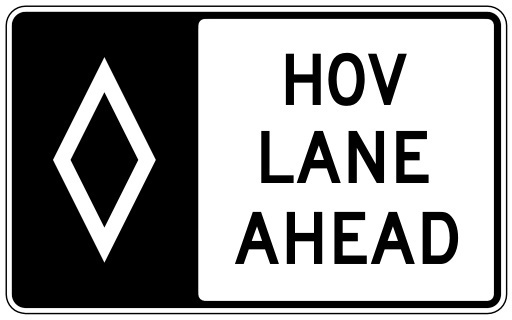 The HOV lane is a High Occupancy Vehicle lane, sometimes referred to as the carpool lane. During peak travel times, the HOV lane is restricted to vehicles carrying two or more passengers. The intended purpose for the HOV lane is to encourage people to drive together, reducing the amount of cars on the road and decreasing air pollution.

When you’re driving down the highway, you may notice that the HOV lane moves faster than the normal traffic lanes. Avoiding the traffic congestion is one of the perks of driving in the HOV lane. There are designated areas to enter and exit the lane, helping traffic flow smoother. If you cross the lane in a non-entrance or exit, you risk being written a ticket. In fact, driving in the HOV lane without multiple passengers can also result in a traffic ticket.

Who can drive in the HOV lane varies by state, so you should look up your local laws before jumping in. Many places allow “green” vehicles, such as hybrids and battery electric cars to use the HOV even if they do not have multiple passengers in the car. Motorcyclists, law enforcement vehicles, and buses are allowed to use the lane in certain jurisdictions.

Will you be driving in the United States? Download our free guide Top 5 Steps Expats Need To Know for Driving In The U.S. to learn what you need to do before getting behind the wheel.